Support our work with a tax-deductible donation

On March 25, 2021, Portland cartoonist David Chelsea posted this memorial note about Anne Richardson on his blog. Thank you, David.

“Now that I’m back online, a bit of unfinished business. I had meant to get this memorial note up for my friend Anne Richardson, who died of cancer in mid- October. From an online obituary:

She returned to Portland and in 2006 dug into what would become her passion — Oregon’s contribution to film making, animation and print cartooning.

She and her husband, Dennis Nyback, founded the Oregon Cartoon Institute in 2007 to create resources and programs about cartooning and animation. In 2009 they hosted the Sesquicentennial Film Festival at Marylhurst College. Anne also originated the Oregon Film History Conference in 2015.

Anne taught at the State University of New York’s Kingsborough College, Linfield College, and Portland State University. She is the author of numerous papers and articles, several multimedia presentations, including the short film “A Boy and His Car,” and the blog “Oregon Movies A to Z.” She had begun a book about Oregon film history when she was diagnosed with terminal cancer in May.

Anne wrote that Portland and Oregon’s early investment in arts education, together with local postwar technological innovations, seeded a unique regional culture for making independent film and animation. She strove to foster awareness of this history in hopes of maintaining Oregon’s strength as a center of artistic endeavor. She particularly wanted to inspire Oregon’s youth with the state’s hidden history as an independent arts powerhouse.

I knew Anne from early childhood. Her parents had met my parents through liberal Portland circles and become good friends, which meant my sisters and I hung out with the Richardson’s kids a lot. There were eight of them, six of them daughters, so it was hard to pick out Anne from the rest. At a time when we knew a lot of big Catholic families, the Richardsons were unusual for being a big Protestant family; Anne’s dad Harper Richardson was a Methodist minister who scandalized his flock by sermonizing for Civil Rights and against the Vietnam War. My earliest specific memory of Anne is when she showed up at my door one day with a chess problem, figuring that I could solve it. She seemed to have an inflated sense of my intellect- I would have been around ten at the time- because I had no idea at all.

We stayed in touch through the years. In the 1980s we both lived in New York City. Anne was in film school at Columbia, and I was making my way as a freelance illustrator. It was then that I drew Anne with her sister Sarah in my sketchbook:

In the 1990s, we both moved back to Portland. Anne always gave me credit for inspiring her to found the Oregon Cartoon Institute. One day I casually mentioned to her that legendary cartoonist Basil Wolverton came from Portland, which made her realize like a bolt from the blue that Portland had always been a cartooning Mecca. She founded the Institute in 2007 to spread the word.

One way the Institute spread the word was by hosting an annual Oregon Film History Conference, and occasional one-off events like this one on the history of Portland’s underground press. I was a speaker at that, and Matt Groening was a surprise guest: 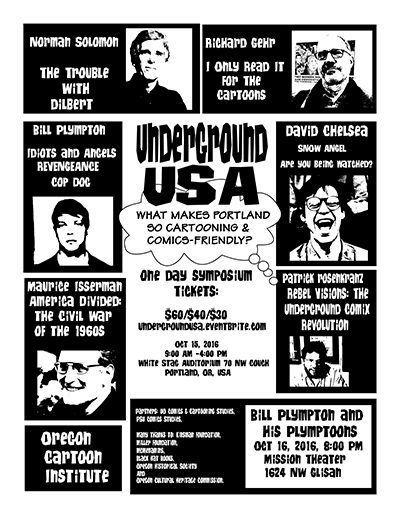 Photos from the UNDERGROUND USA event

Anne’s friends and family gathered for a suitably distanced memorial event at the Redwood Deck in the Hoyt Arboretum at the end of October. There were readings of “Out of the Cradle” by Walt Whitman, and a group song led by Anne’s daughter Jenna. At the close of the ceremony, we were invited to look up:

By coincidence, another old friend in the cartooning world died the same day as Anne. David Geiser was in the first generation of Underground cartoonists- a great friend of S. Clay Wilson’s, apparently- but I was not aware at all of him until I rented studio space from him on Broadway near Prince Street in the 1980s, by which time he had become an abstract painter. After Eve & I moved to Portland, we stayed vaguely in touch. Dave’s style edged back to a kind of Philip Guston cartooniness, and he married Mercedes Ruehl, of all people. I never did get around to reading his comics work, which has never to my knowledge been collected in book form.